Southampton are believed to be closing in on their third signing of the 2018 summer transfer window, with Jannik Vestergaard set to join in a deal worth £18m from Borussia Monchengladbach.

The Saints have already signed Stuart Armstrong and Mohamed Elyounoussi and it seems they will make Vestergaard the next man through the door at St Mary’s.

Following Virgil van Dijk’s departure to Liverpool for £75m in January, Saints have encountered plenty of defensive struggles. The failure to replace Van Dijk nearly cost the club their Premier League status, and signing a central defender had to be the priority this summer.

So, can Jannik Vestergaard be the man to remedy Southampton’s defensive woes? I’ve taken a look at just who Saints are signing, and what he can bring to the team ahead of next season.

Jannik Vestergaard spent his early footballing career in his homeland of Denmark, plying his trade in Brondby’s youth academy. He flourished in the team’s Under-19 side and interest from Germany developed, as Hoffenheim won the race for his signature in 2010.

The central defender became a regular fixture in his native Denmark’s younger sides, with the move to Hoffenheim proving to be of benefit. In his first season with the club’s second team, he managed to work his way through from the Danish Under-18 team to the Under-19 squad, before establishing himself in the national team’s Under-20s setup.

His displays in Hoffenheim II towards the end of the 2010/11 season earned him the right to train with the club’s first-team squad, and Vestergaard was even named in the matchday squad as a substitute on a regular basis despite his tender age. On 16 April 2011, he made his senior footballing debut, coming on for little more than a minute against Eintracht Frankfurt in the Bundesliga. 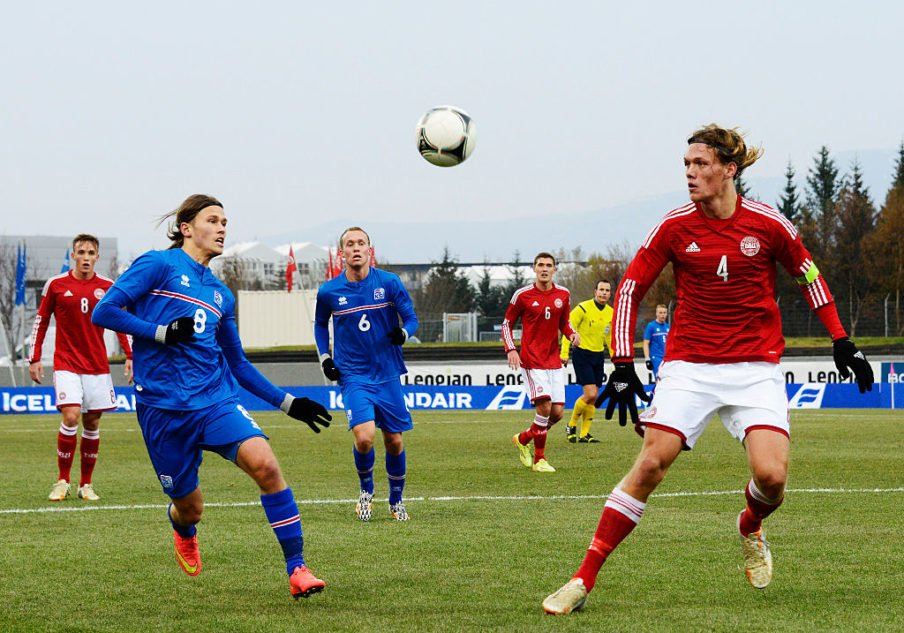 The 2011/12 season was also a good one for Vestergaard; he established himself as one of Hoffenheim’s brightest young prospects and made 23 appearances in the Bundesliga. His mature and composed displays for his club’s first-team earned him a regular spot in the Denmark Under-21s’ starting line-up.

Vestergaard continued in a similar vein of form in the 2012/13 season but endured a stop-start campaign due to an extended spell on the sidelines, caused by lateral collateral ligament damage midway through the season.

After a strong campaign in Germany, Vestergaard was rewarded with his first ever senior cap for Denmark, as he made his debut in an international friendly against Poland. Vestergaard went on to enjoy another strong season and was soon dubbed as one of the most promising defenders in Germany following his establishment as a key player for Hoffenheim.

The 2014/15 season was one of change for Vestergaard, though. He fell out of favour in the first half of the season under Hoffenheim boss Markus Gisdol and underperformed when called upon. This led to a surprise January move for the powerful centre-back, as Werder Bremen paid €2.5m to land the defender. 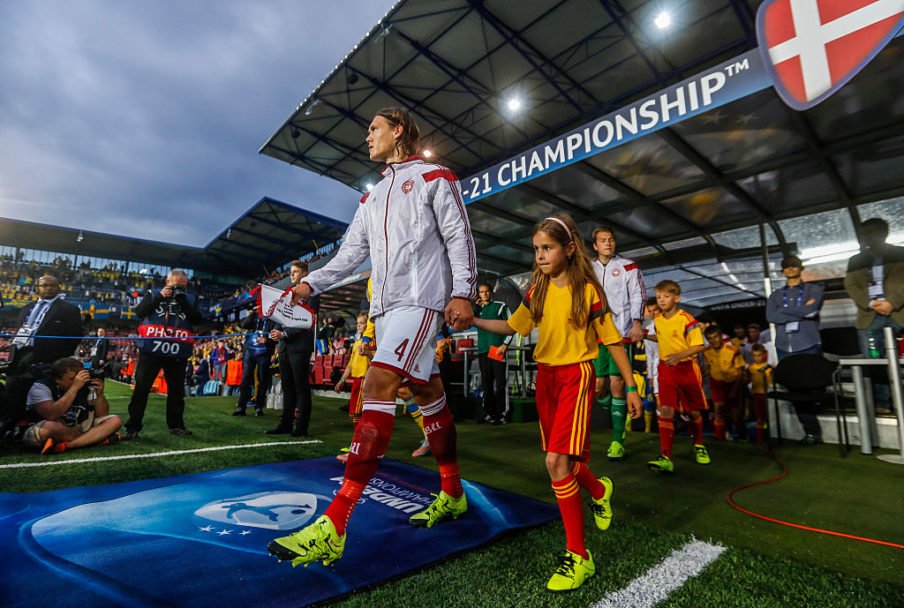 At this time, Bremen were in huge danger of succumbing to relegation and found themselves concerningly low in the table. However, in Vestergaard’s first five games for the club, they didn’t lose a single match, and his influence proved to be the catalyst as they steered clear of relegation from the Bundesliga. His composure and dominance aerially aided them as they avoided what could have been an embarrassing second half to the campaign.

Vestergaard soon established himself as a fans’ favourite at Werder Bremen and emerged as something of a talismanic figure for the team. They finished in 13th place in the Bundesliga but Vestergaard stood out, making 33 appearances in the 2015/16 season and even captaining the team on a couple of occasions.

After flourishing at Bremen, his performances weren’t going unnoticed, and Borussia Monchengladbach swooped for Vestergaard’s signature. The Bundesliga outfit spent €12m to recruit the Dane from Bremen after they finished fourth in the German top-flight, beginning preparations for the Champions League in the next term.

The 2016/17 campaign brought success for Vestergaard at Monchengladbach. He made 49 appearances in all competitions and was a regular for his side in their respective Champions League and Europa League campaigns. 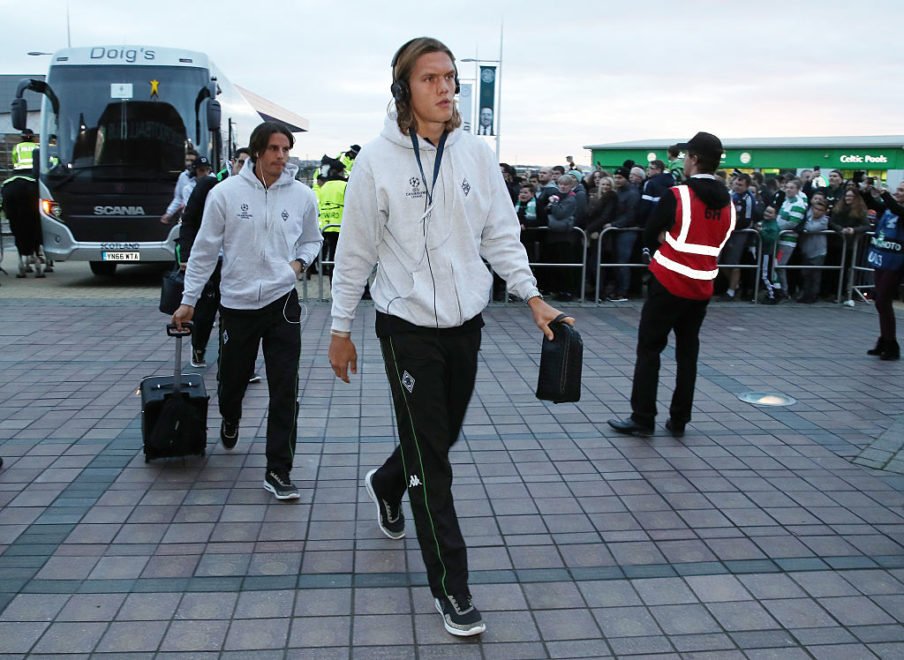 In more recent times, Vestergaard continued to perform well in the Monchengladbach team and featured heavily under Dieter Hecking throughout last season. He operated in varying systems consisting of three-man and four-man defences and even secured his place in the Denmark squad for this summer’s World Cup.

Vestergaard did not feature in his country’s campaign in Russia, with Age Hareide favouring the formidable duo of Simon Kjaer and Andreas Christensen, but a new chapter awaits for the player this summer, with a move to Southampton now on the cards.

Vestergaard makes use of his physically imposing frame to assert dominance from the back. Standing at 6’6″ tall, the 25-year-old competes well in the air and is a towering figure at the back. He won 62% of his aerial duels in the Bundesliga last season as he enjoyed yet another solid campaign with Monchengladbach. Vestergaard is a threat from set-pieces and has a track record of scoring a handful of goals each season from latching on to corner kicks.

Vestergaard is also a defender who is aware of his limitations, therefore plays to his strengths. What he lacks in pace, he has proven to make up for with his reading of the game and his composure in and out of possession.

The Denmark international is capable of playing in a variety of approaches but flourishes with little space vacated in behind the defensive line, ensuring that his shortage in acceleration is not exposed by opposition forwards. A noticeable characteristic of Vestergaard’s style is that he likes to play passes over long distances. He can be partial to a long, raking diagonal pass, a quality akin to that of Wesley Hoedt, but is also capable of playing the ball out from the back.

Vestergaard doesn’t have a tendency to over-play and last season totalled a pass accuracy of 89% in the Bundesliga. He finds a nice balance between being a ball-playing centre-back and also a safety-first style of defender. This has been only exemplified by the statistic that on average last term, Vestergaard made five clearances per match.

The former Brondby youth star is a player who likes to intercept the ball in more advanced areas beyond the defensive line and is known to put his body on the line to thwart opposition forwards’ efforts on goal. In fact, Vestergaard made a total of 39 blocks in the Bundesliga last season – more than any other player in the German top-flight, per WhoScored.

Twitter: Jannik Vestergaard: Blocked more shots (39) than any other player in the Bundesliga last season

During his younger days in Germany, Vestergaard was likened to recently-retired Arsenal defender Per Mertesacker, as despite a noticeable lack of pace, the defender’s intelligence and physical qualities compensated for his few weaknesses.

One redeeming quality of Vestergaard’s that has been clear for all to see throughout his tenure in Germany is his ever-developing tactical intelligence. He has continued to adjust to different types of games against varying styles of strikers and has impressed; this essence of intelligence required to compete in the Bundesliga will surely contribute to his likely success in the Premier League.

A somewhat obvious strength of Vestergaard’s is his ability to compete aerially at both ends of the pitch. He will become Southampton’s tallest outfield player and he has proven over the years that he puts his frame to good use.

Vestergaard makes good split-second decisions when his teams are defending, which is sure to bode well in English football. He occasionally advances beyond the back three/four to intercept passes around the edge of his box, highlighting his excellent reading of the game.

The defender is by no means clumsy and is capable of spraying the ball across the pitch well. His passing technique is strong and he is capable of utilising both feet with composure, varying between vertical passes into central midfielders and long diagonals to wide players if the opportunity presents itself. 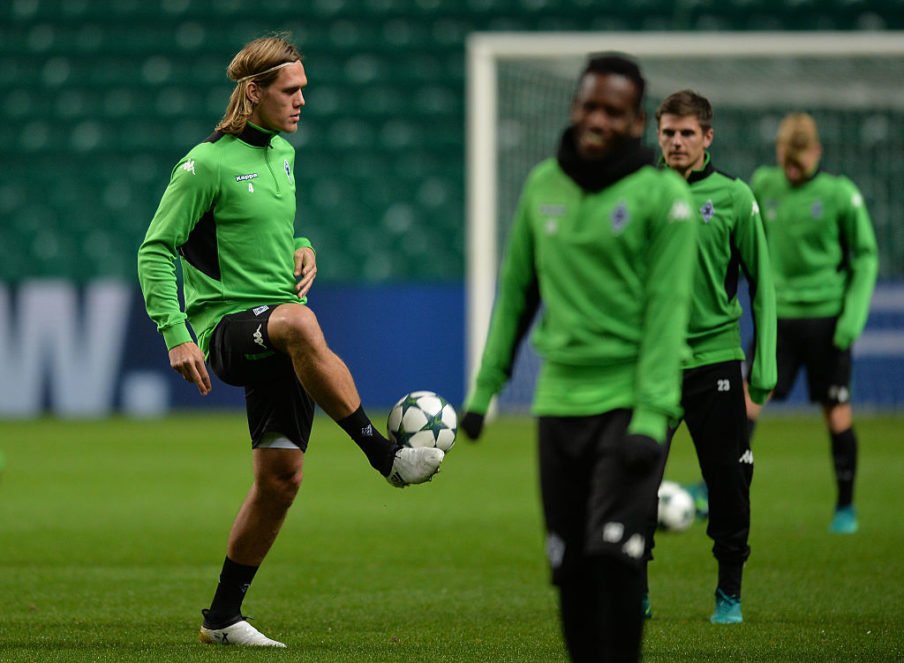 Vestergaard is also known to be something of an organiser in central defence. He presented leadership qualities during his time with Werder Bremen and has been shown to step up in times of adversity. At only 25-years-old, this trait is something that should be of great benefit to Southampton.

The player is also versatile. Although Vestergaard is, of course, best utilised as a central defender, he has brief experience of playing as a holding midfield player and has not looked out of place when progressing further up the pitch.

As has been previously alluded to, Vestergaard is not a defender who is blessed with a great deal of pace. It’s hardly normal for a player of his height and stature to be especially light on their feet, and Vestergaard is no different.

He is slow on the turn and struggles to keep up with strikers when they have burst away, but he is not actually as sluggish as many have made out. The similarities to Per Mertesacker with regards to style are distinguishable, as both have proven to compensate for their shortage in acceleration with intelligence and anticipation, but pace is certainly the weakest area of the pair’s respective games.

Vestergaard’s decision-making is occasionally frustrating as, despite his undoubted technical ability, he has a tendency to play unusual passes, ignoring simple options around him. This, however, is not a huge concern, with Saints often making various passing lanes in vertical areas following Mark Hughes’ arrival.

Where does he fit in?

The beauty of signing a player like Vestergaard is the flexibility that comes with it; he has experience of playing in systems consisting of three central defenders, and also ones entailing a flat back four. This will give Hughes the option to alternate between formations if he so wishes to.

For Monchengladbach last season, despite being right-footed, Vestergaard operated mostly as the left-sided central defender in a four at the back system. He does, however, have experience of playing as the right-sided centre-back. When Hecking opted to play with three at the back, Vestergaard was commonly utilised as the middle man in defence. This would enable Hughes to provide continuity with his seemingly favoured setup of three centre-backs flanked by wing-backs, as Vestergaard will be able to slot seamlessly into the setup.

It appears to be likely that Vestergaard would be deployed as the middle central defender if Hughes continues to vary between 5-3-2 and 5-2-3, given his capability to step into midfield areas to collect the ball and intercept through balls from opposition attackers. This would not only help to nullify Vestergaard’s shortage of pace, but also to position him best for aerial duels and crosses into the box.

Vestergaard will reportedly join in a deal worth £18m, making him Southampton’s most expensive defender in the club’s history.

However, it comes as no surprise to see Monchengladbach demand such a price for their central defender; he is at the perfect age to make the next step and has a rare balance of experience and capacity for growth as a player.

The centre of defence is absolutely the problem position for Southampton and with the proposed acquisition of Vestergaard, the club will go some way in affording Hughes a better range of options at the back.

On paper, this signing appears to be the perfect fit for all parties. Southampton need an aerially dominant central defender who is technically capable too and at £18m, you’d struggle to find a player of higher quality for much cheaper than Vestergaard in today’s market.