A very entertaining and tactically interesting match ended up with a negative result for Southampton. After a first half that saw signs of positivity compared to their match against Burnley, the fans had thought Ralph Hasenhüttl’s side would have an advantage. But Sadio Mané killed that off with an exquisite curling goal. The second half saw The Saints tried to get back into the game, but just after they started to do so, Roberto Firmino scored the second goal for Liverpool. Here, we will analyse the tactical points that went wrong for Southampton against The Kop.

The home side continued to line up in a 5-2-2-1 formation. There was one change to the side that have travelled to Turf Moor as Pierre-Emile Højbjerg returned to the midfield line. He replaced Danny Ings who was included on the bench with new signing Kevin Danso. Liverpool, on the other hand, were relieved to find that Adrian was clear to start. Jordan Henderson sat on the bench as Alex Oxlade-Chamberlain replaced him.

Contrast to how they entered their opening match, Southampton were very confident in pressing the opponent. Three attackers upfront constantly applied pressure on Liverpool’s build-up by closing down the ball-carrier and his passing options. This forced The Kop to circulate the ball among the defenders while they couldn’t build attacks.

Furthermore, it resulted in the opponent making heavy touches and misplaced passes. Nathan Redmond and Che Adams were quick enough to capitalise on those and create chances towards Adrian’s goal. They caused many troubles for Liverpool defenders with their intensive pressing while still able to link up the play.

While in possession, Southampton had the tendency of building their attacks from the backline. With a three-man build-up and received more support from the central midfielders, they usually move the ball high up the pitch. Liverpool’s press didn’t affect them much since passing triangles were constantly created to keep the ball circulated with a higher rate of efficiency.

Most of Southampton attacks came from both flanks where the appearances of Yan Valery and Ryan Bertrand became more important. When Bertrand overlapped, he usually created short combinations with Nathan Redmond and also exchanged positions with each other. One drifted inside with the ball, the other one moved out wide and provided a passing option.

Noticing Liverpool’s high defensive line, Southampton players attempted to play long balls towards the space behind it for Adams and Redmond to run in. The ball managed to find its destination but was immediately intercepted by van Dijk or Robertson. Still, the home side had a successful period when it comes to creating chances. But in terms of converting them, they lacked a bit of luck, especially with Yoshida’s close-range header. 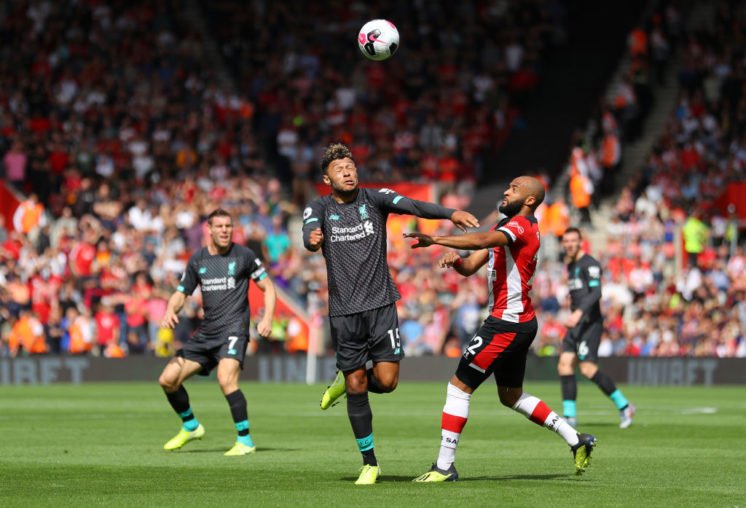 Defensively, they created a medium 5-3-2 block on the edge of their defensive third. Although James Ward-Prowse started as a winger, he occasionally dropped deep next to Romeu and provided supports for the Spaniard. Romeu tended to move out of his position to tackle the ball and it required somebody to cover the spaces up. Ward-Prowse was on hand to do so and screened the defence at the same time.

As good as the team were in defence, there were times that our defenders showed signs of sloppiness. In most of Salah’s sprints, Vestergaard couldn’t keep up with the Egyptian and had to call for help from Yoshida. Also, besides from having a decent game, Bednarek lost a couple of interceptions. Fortunately, they didn’t result in chances for Liverpool and his teammates recovered possession immediately.

But the cruel rule of football had haunted Southampton after they couldn’t convert the chances. With just a few seconds until the first-half ended, Mané picked up the ball inside the box and placed it into the top right corner. That goal surely hit the home side hard as they entered the second half with a more passive state. 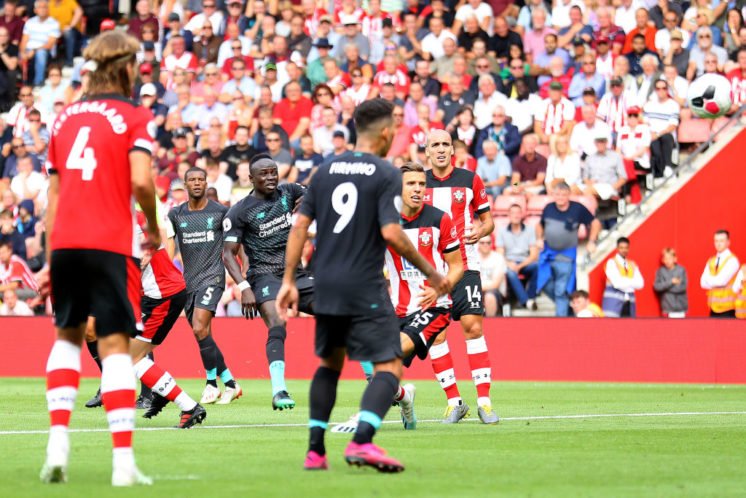 Liverpool were getting comfortable on the ball and they started to have more possession. This prevented Southampton from building attacks and found their way into the 16-yard box. The Kop also adapted the same method that the home side used in the first half. They occasionally used long balls into the spaces behind Southampton’s defensive line. And with players that had the pace like Salah, Mané and Firmino, they could easily start a dangerous counter-attack.

With Southampton found their rhythm again and hoped to up their game, Liverpool found the second goal of the game. Firmino’s individual effort beaten two of The Saints’ defenders and Angus Gunn had no chance of stopping it.

Southampton had to play with more urgency and pushed on during the remaining minutes. They still kept their high tempo of pressing upon Liverpool’s build-up and forced them to make backpasses. Although this might seems like fit with Jürgen Klopp’s idea of retention the ball, it backfired them once. Adrián received the ball from Matip and also noticed that Danny Ings, who was substituted on for Romeu, was trying to press him. But the Spaniard goalkeeper kicked the ball right at Ings’ feet and deflected into the goal. 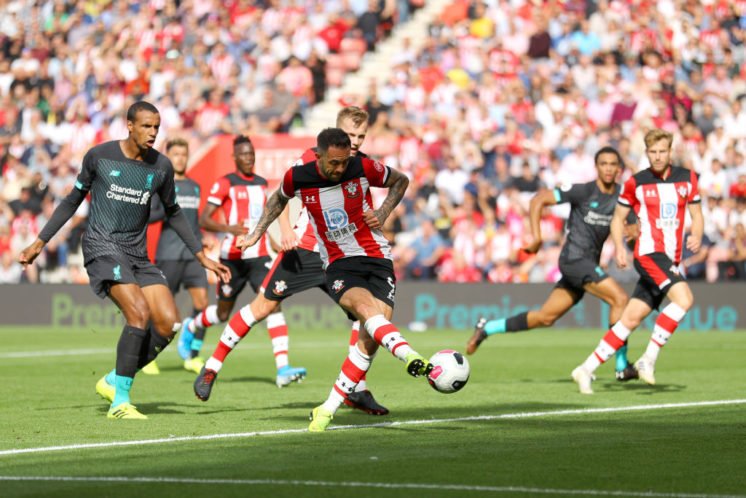 With that goal in mind, they pushed even higher up the pitch and attempted to get that equaliser. Ings once again came close but he couldn’t convert Valery’s cross into the net. The interesting game ended in a 2-1 lost for Southampton, who were thought to deserve more in the day.

Southampton were still looking for their first point of the season as they have had a very good first half. The second period saw them dropped the tempo and it ultimately led to Firmino’s goal. The result might look a bit downside, but there were more negatives to take on from the game. Hasenhüttl’s side need more performances similar to what they have shown inside that first period and solve their goalscoring problem at the same time. Like I’ve said, we are still in the early days of the season and problems being shown in the process is normal. The game had allowed us, the fans, to see a more positive reaction from the players and they need our supports to build on more of the same.