Despite the continuation of Southampton’s late-season rut in the wake of their 2-1 defeat against Spurs, Alan Shearer singled out one Saints star for praise.

24-year-old Spurs academy graduate Kyle Walker-Peters continued to shine for the Saints – this time against his former club – but was once not the Premier League mainstay Southampton fans may know him as.

With just one appearance under Jose Mourinho’s Spurs reign, the right-back joined Southampton on an initial six-month loan spell in January before sealing a £12 million move in the summer.

The St Mary’s stalwart, who has featured in three quarters of the Saints’ starting line-ups this season, looks a reborn defender from the unwanted option in north London.

In the latest episode of Rising Stars on the Premier League’s YouTube channel, Shearer turned the spotlight on the home-grown talent and was hailed as one of the season’s most improved players.

“Southampton have had a mixed season so far, but Walker-Peters has been pretty consistent, registering the most tackles of any player in the team and is amongst the league leaders in tackles won,” said the ex-Newcastle and Blackburn man.

“Going forwards though, he’s had less success, but when you look at his defensive qualities, you can really see his value like… against West Ham.

“He shows a quick burst of speed to react to Fornals’ backheel, he closes down Cresswell in an instant, shows great composure and blocks the cross.”

One live fan comment on Twitter filtered to the studio claiming that Walker-Peters was a “steal”, to which Shearer added: “As a long-term investment, I have to agree there.

“A reported £12million for someone who could be at the club for the next 10 years or more is great business I think. I back Walker-Peters to keep getting better for Saints.”

With no goals and just two assists to his name, Shearer is right to call out his lack of end product – but his first duty is defence.

Valued by Transfermarkt at his highest-ever value, he looks to be a player on the rise – and one trusted by Ralph Hasenhuttl at the back.

Is Walker-Peters the most improved Saints star? 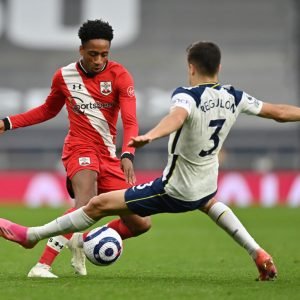